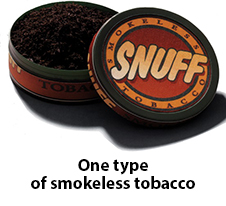 There are many serious health consequences of using smokeless tobacco, including various types of cancer.  Using smokeless tobacco can lead to nicotine addiction and dependence. Compared to cigarettes, smokeless tobacco products like chew and dip can contain more nicotine.  Since 1988, nicotine has been established to be as addictive as heroin and cocaine, Adolescents’ bodies are more sensitive to nicotine, and adolescents are more easily addicted than adults.  Because the adolescent brain is still developing, nicotine use of any kind during adolescence can disrupt the formation of brain circuits that control attention, learning, and susceptibility to addiction.  There is no scientific or medical evidence that using smokeless tobacco products can help a person quit smoking.  Smokeless tobacco should NOT be used as an alternative to smoking – we encourage all tobacco users to quit.  Tobacco Free Florida has free and evidence-based resources that can help you quit any form of tobacco.

Apart from cancer, other oral health issues include mouth sores, gum recession, tooth decay, and permanent discoloration of teeth.  Spit tobacco causes gum disease, also called gingivitis, which can lead to bone and tooth loss.  The use of some types of smokeless tobacco products is associated with an increased risk of heart disease and fatal stroke.  Smokeless tobacco use can lead to reproductive health problems, such as reduced sperm count and abnormal sperm cells for men.  Women who use smokeless tobacco may be at an increased risk of preeclampsia, premature birth, and low birth weight.  Preeclampsia is a condition that may include high blood pressure, fluid retention, and swelling.  Smokeless tobacco can cause nicotine poisoning in children.

Adults should be aware that many new smokeless tobacco products are easy to conceal and use in areas where smoking is banned. Professional baseball players, who have traditionally had high levels of smokeless tobacco use, serve as role models for impressionable youth.  Other United States jurisdictions like San Francisco and Boston are beginning to pass ordinances that ban smokeless tobacco at sporting venues.
Posted by Apalachicola Mayor Van W. Johnson, Sr. at 5/26/2016 12:45:00 PM